I was shivering so much in the camper van at the 20 mile checkpoint more of my cup of tea went on my feet than in my mouth but on what turned out to be a truly grim day of driving rain, high wind and hail a really challenging and fun ultra was born.

My original plan was to race the 30 mile course. I was confident that my local knowledge of the route would get me round in a sub 5 hour time – not enough to win but a target I’d have been happy to hit and then my plans changed again my wife Ally also entered the race in what was to be her first ultra so we agreed that I’d run the first 30 (it’s a two lap route) with her so we cross the line together and I’d then carry on for a second lap.

Updated: I finished 3rd male in the White Rose 2014 race

It didn’t quite work out like that as a combination of the truly awful weather and challenging course (about 4-4500ft of ascent each lap) meant we eventually crossed the line in 7 hours 51 mins but we were more than happy with that as the primary goal for the day was for Ally to pick up the first ever Ultra finishers medal – job done and she did amazingly well and paced her effort superbly.

My plan was to go out for a second lap if we finished more in the 6:30-7:00 hour timescale but despite warming up and feeling much stronger in the last 5 or so miles, it just didn’t make sense to go out nearly 2 hours behind schedule having been extremely cold for a lot of the day. No biggie though, it was Ally’s day and I’m delighted to have been able to play a part.

Not only that, this is an ultra that is close to my heart as I count the organisers and many of the friendly faces out on the course marshalling in dire conditions as good friends and having been trying to lend a hand and pass on ideas for how we could make it a great race it’s been great seeing it finally come to life.

I knew it, I knew what to expect and I’m looking forward to seeing others reviews over the coming weeks. It’s a beast, there’s very little flat on the course and in the weather we had yesterday it was very punishing and this is reflected in the times for the 30 mile winners which at 4:39 for the winner is a measure of course (a massive congratulations to friend Jonny Cartwright who came 3rd in 4:44) and the weather. 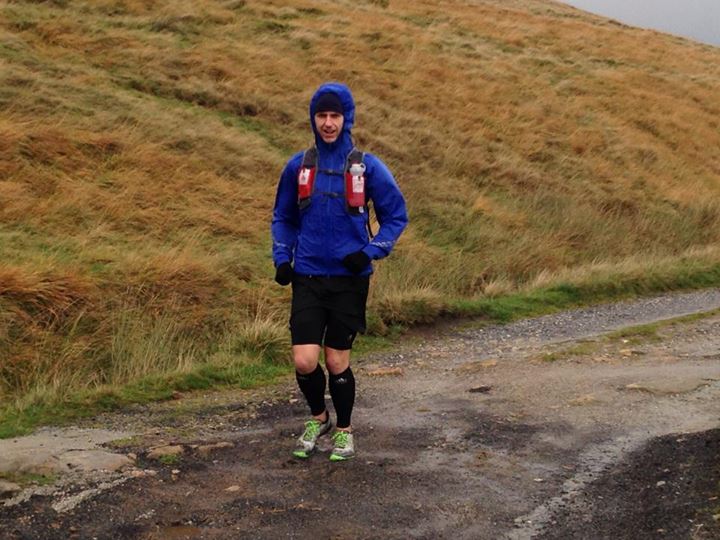 With a good mix of quiet back country roads and then some unrelenting stretches of what is normally beautiful moorland trails would on another day be a great day out and apart from a couple of spots it was well marked, easy to follow and with friendly faces every 5 miles you were never too far from civilisation. Runners were all provided with a waterproof route map and I know this ultra was marketed as not requiring navigation skills I think a couple of folks (including the 60 mile winner) went a little off course at points but I think the race directors and staff did a fantastic job getting those people back on track quickly and efficiently.

I actually made the little marker stickers that were on fenceposts etc, and I think next year, I’d make them bigger and and on a luminous background as they were a little hard to see directions until you were right on them. Sorry!

I can’t sing the praises of the OMM Kamleika jacket highly enough. It kept my top half dry in driving rain and hail for more than 5 hours and although I eventually got cold, my top half was pretty warm with only a long sleeve tech tee and at mile 15 I put on another short sleeve tee but I think I probably just under-dressed a little in what turned out to extreme weather. I had a full kit change ready for the second lap but obviously never used it.

My footwear choice just didn’t work out for me though. I’d decided to run the first 30 in New Balance MT110’s and I had some issues with calf tightness and ultimately sore feet from them just being wet and cold. I’m transitioning to wearing reasonably minimal shoes but I don’t think I’m quite ready for 30 miles in these so I spent a fair amount of time wishing I’d started in the Adidas XT4’s I was planning on using for the second lap. Oh well..

One thing I did really appreciate after wearing cheap Karrimor running socks for my the duration of my short running life was the investment I made recently in some Drymax hyper thin race socks. The difference in them not retaining water or moving around my shoes was immense. Highly recommended.

As I said, I’m very close to this race and the organisers so perhaps I’m not the perfect person to be objective but I think even in the weather yesterday the feedback was overwhelmingly positive and I’m in no doubt this race is going to sell out fast for the 2014 event as even on a nice day it’s a tough route but with the potential late October / early November date there’s always the potential for weather to play a big part too.

The race staff / Organic Adventures team put on a cracking event and while there were a few minor teething issues that are inevitable for a first time event, I think they’ve done a great job.

I’m glad I didn’t go out for a second lap in the 60 miler! With only 7 people running the 60 miler, last place was 12:06 which is exceptionally competitive for the course and about an hour or so faster than I’d hoped I could run so there was some serious talent in the small field including Irish running machine Ray Lanigan who utterly dominated and ran an incredible 10 hours 21 minutes for his win, 39 minutes ahead of Ed Melbourne who himself is an excellent ultra runner.

I think in better weather and with course knowledge next time, Ray might be able to run sub 10 as he went off course on the second lap which, now it’s into winter time meant he was running in the dark for a couple of hours too and around that route, dark means pitch black!

I’m signing up as soon as entries open, I’m sure lots of others will do too and I think there’s a bright future for this race. I’d love to help out again organising and I’d be tempted in the summer to run the full route to create a gpx file to help people follow some of the slightly trickier points and would definitely make bigger and brighter direction markers but other than that I can’t wait for the next one!

For those interested, the 2013 results are already online and you can enter the 2014 race online.