I’ve always been fairly confident of hitting my goals when I enter a race but by god did I do a number on myself leading up to the Ladybower ultra.

This race along with the Grizzly back in March was on my calendar from last year as an “A race” and originally I’d entered the 50 miler but recently I’ve been questioning just how much I want to pound out longer ultras, so leading up to this one I’d decided to drop down to the 35 mile option and try for speed instead of endurance.

My training for this race has gone pretty well, I’ve stepped up the mileage and since feeling totally weak at the end of Day 1 of the Trail Chase at about 20 miles I’ve included one decent effort 20 miler a week for the last few weeks and been around the 60 miles a week mark for the last 6 weeks but as the day came it just didn’t feel enough for what I wanted to achieve – which with my growing confidence was to compete for a win.

I figured that as long no ultra god or goddess turned up and blazed around running 7 minute miles, I’d have a reasonable chance of doing well. Got to aim high right? 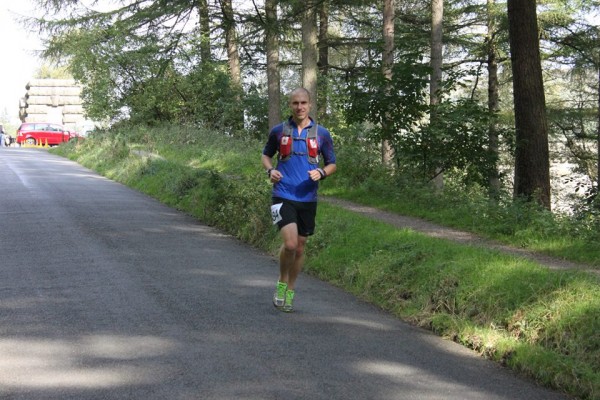 So I got to the start line physically in decent shape, I ran my fastest ever 5k last week (17:39 at Parkrun) so i knew the training had been good but mentally there were a lot of doubts that manifested in the lead up.

However, when it came to it I suddenly had a total lack of confidence in my ability to compete, even though I had a pace in mind (8:15-8:30/mile) I felt like an impostor on race day and wondered why I’d set myself such a lofty positional goal (in my head) I had no right to think about. It preyed on my mind for a fair while I must admit although I knew in my legs and training I could do this on a good day, my brain just wouldn’t follow the script.

I didn’t feel great on the morning, my stomach was a little upset and I didn’t fancy much of my normal breakfast – organic porridge oats soaked in milk overnight – and wandered down the road to meet Michael who would also be running the ultra (his first, although an experienced runner) and giving me a lift. The weather was absolutely perfect, dry and sunny but not too hot and with a slight breeze.

There was a quick race brief, the route was nice and easy and the 50 mile runners set off first followed by the 35 milers 10 minutes later and then the 20 milers another 20 minutes back and we all ran a quick 5 mile loop of the first reservoir back to the start before running around 3 reservoirs for a 15 mile loop.

My stomach basically went south from the minute I started running.

Those who run ultras will certainly know the feeling of trying to shuffle along while basically not going to full on brown alert and ending up with lycra shorts full of unimaginable horror. Avoiding that was basically the story of the day.

I had to make use of the visitors centre facilities after only 4 miles and then duck into a bush after about 9 and a porta-loo at about 17. All the while not being able to get a decent stretch of running at effort. Thank god part of my little bag of essentials includes travel tissues!

Having already psyched myself out this race before I even started, with my stomach not playing ball either I was going to pull out at the end of the 20 mile route and not bother with the last lap because I figured why bother. I’ll battle through a race and pain to meet an objective but if that’s long gone I don’t always feel obliged to punish myself further just for the sake of finishing so I was well and truly ready to sack this one off as a bad day out and move on.

My stomach started to stabilise a little around mile 18 and the lap being slightly more than 15 miles meant by the time I got to the start/finish I felt alright for the first time all day.

I forgot to DNF!

In the end, I got to the finish of the lap and with a few of the 20 milers already done, plenty of marshals and organisers clapping I completely forgot about pulling out. I got a bit swept up with feeling ok and the support and also the motivation that a couple of friends had also had great results in their ultras this weekend so I’d feel a bit sad if I didn’t give a bit of a go.

With that, I skipped straight through the finish and out onto another lap having totally forgotten to even top up my water bottle.

In the end, it all came good. My stomach seemed to finally settle down and I didn’t feel in immediate danger of crapping myself at least. The legs felt OK although my feet did feel a little delicate as the surface was largely hard pack trail and some tarmac sections and my Kinvara Trails are pretty unforgiving and I wish I’d actually bought my road shoes which I’d have swapped into given the option.

Still, I managed to keep a reasonable pace and kept the walking to a minimum. Went through 26.2 in about 3:55 or so which less than 2 years ago would have been something I’d have been blown away by so a bit of perspective there for me I guess!

Getting to 30 was a good place to be, mentally, the race was closing out and I was feeling stronger than ever and decided to just get the day over and done with and go for a cup of tea with a load of sugar. Something I often fixate on in the closing stages of a longer race!

Finally having a settled stomach and a bit of leg strength still, I managed to push the pace in the last 4 miles up to 7:58, 7:13, 7:46 and 7:24 miles and with that managed to pick off a couple of people who’d long passed me while sat on a bog or in a bush somewhere earlier in the day and crossing the finishing line in 5:39 for 4th place.

The winning time was 5:01 which I’d had down as a stretch goal and something I think I’m definitely capable of running, particularly on a fast course like this one but it would definitely need to be a day where it all went right for me to run a time like that.

Thanks to the occasional vagueness of GPS mapping, my Suunto Ambit logged 5:13 on MovesCount (moving time – I’d left it on autopause) and Strava logged the same GPS track as 5:24 so during the race I basically spent anywhere from 15-25 minutes not moving forward so plenty of scope for improvement another day.

I’ve found in recent training long runs that I’ve not actually taken any gels for 20 milers and felt very strong still so I kept it simple and only carried 5 Torq gels and used 4 and didn’t pick up anything from the checkpoint so very low calorie intake in comparison to what gel manufacturers would have you scoffing but I’ve felt ok in training with my nutrition and felt ok with this and I know that because my stomach issues began right at the start it wasn’t the in-race nutrition to blame.

Organisation and other racers

Thanks to the organisers and marshals who made it a great day, the route was a great one if you ever want to race a fast ultra and nice and scenic and everything went off smoothly although I’d definitely have appreciated a tea urn at the finish line for a brew rather than having to wander down to the visitors centre to buy one.

Would I do this race again? Yep, it’s pretty flat and fast and reasonably local so certainly one to keep on the radar if you want to see how hard you can push yourself at pace. I look forward to seeing the full results list and any photos that were taken.

Congratulations to Michael Lunn who ran a great debut 35 miler in 6:12 and to Andy Connell who smashed his 10 hour target in the 50 miler with a 9:25 and to see Ben Wittenberg who finished 3rd and finally to the chap who won obliterated the 50 mile route finishing in about 6:20 and barely looking out of breath. Incredible time.

Ultimately and with a bit of sensible reflection and grounding from Facebook friends, I look at this result as nothing other than a massive success. Despite the various stomach troubles, I ran 35 (well, actually 36.2) miles in 5:39.

When I Ally and I first did the Manchester Marathon in 2012 after just taking up running in 2012, it took us 5:45 so looking back at the entirety of my short running career to cover that distance running a sub 9 minute mile pace is something to be thrilled about and to even be somewhere where I felt an outside chance that a stretch goal of perhaps even competing for a win in an ultramarathon is pretty exciting and simply drives me to want to train harder and more efficiently for the next and final “A” race for the year –  the White Rose Ultra in November.

That said, I think perhaps I’d maybe lost a bit of focus by setting such a lofty goal in the first place and that’s what preyed on my mind and effectively caused the running equivalent of stage fright on the day.

Still, if I don’t aim big, I’m not likely to know how far I can really go so I’ll put this one down as a physical success but a hard earned lesson in mental preparation and file it away in the lessons learnt section of my mind and be happy I stuck it out in the end and just remind myself I STILL CAME 4th!